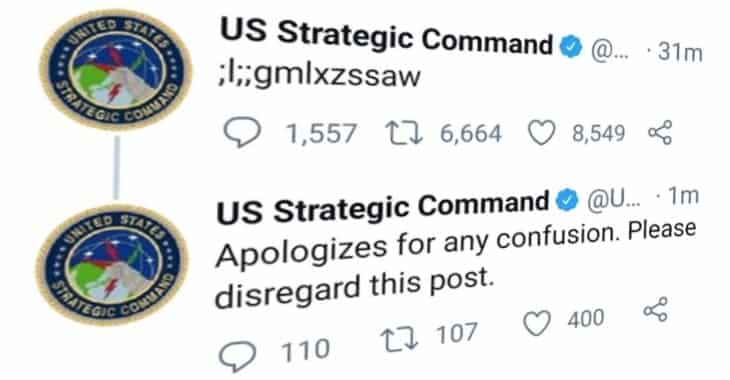 What in heaven’s name is that?

Well, calm yourself down.

Mikael Thalen of Daily Dot promptly filed a Freedom of Information Act (FOIA) request, in an attempt to get to the bottom of the mysterious tweet.

Impressively, US Strategic Command replied within a matter of hours:

“The explanation of the tweet is as follows: The Command’s Twitter manager, while in a telework status, momentarily left the Command’s Twitter account open and unattended. His very young child took advantage of the situation and started playing with the keys and unfortunately, and unknowingly, posted the tweet. Absolutely nothing nefarious occurred, i.e., no hacking of our Twitter account. The post was discovered and notice to delete it occurred telephonically.”

You might be alarmed that a temporary hijacking of the US Strategic Command’s official Twitter might be such literal child’s play, but with so many people working from home during the pandemic this surely isn’t the only instance of an account being (briefly) kidnapped.

Maybe this incident can be best chalked up as a reminder for all of us to lock our PCs when we step away from our desk – at home as well as at work. And maybe Twitter should offer some accounts the ability to only publish a tweet once it has been approved by another user – just to avoid unauthorised tweeting like this?

Now, if it was only so easy to explain “Covfefe”…