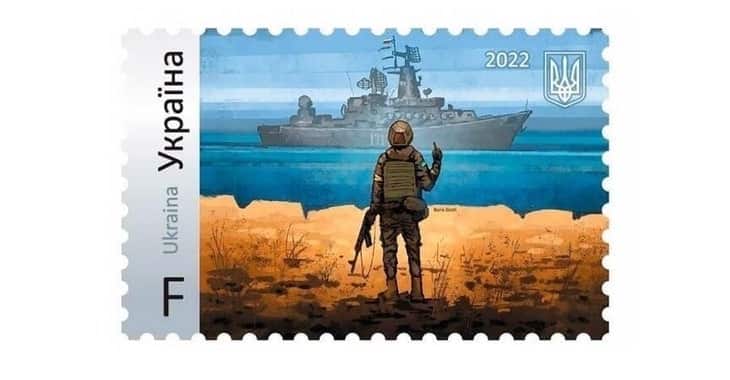 The story so far.

History records that the Ukrainians were not compliant, as this translated transcript of the conversation details:

Russian warship: “Snake Island, I, Russian warship, repeat the offer: put down your arms and surrender, or you will be bombed. Have you understood me? Do you copy?”

Snake Island was subsequently captured by the Russian navy, but the riposte from the Ukrainian guard became a rallying call for resistance.

On April 13 2022, Ukraine claimed that its forces had hit Moskva with two missiles, and it subsequently sank.

It only took a matter of days for Ukraine’s national postal service, Ukrposhta, to issue a stamp honouring the defiance of the border guards on Snake Island as they refused to surrender to Russia’s Moskva warship.

On the stamp, a guard is rebeled giving a defiant “one fingered salute” to the Moskva.

And this is where a cybersecurity element enters the story.

Because on 22 April 2022, Reuters reported that Ukrposhta was hit by distributed denial-of-service (DDoS) attack. The speculation is that this was in retaliation against the sale of the stamps, which cheekily made fun of the fate of the Moskva.

“We are really doing everything, together with internet providers, to restore both the online store and other Ukrposhta systems that are also temporarily not working due to a DDos attack on our systems,” wrote Ihor Smilianskyi, director general of Ukraine’s national postal service, on Facebook.